Earlier this year my husband and I, with the help of the generous staff and volunteers of Habitat for Humanity, bought a house on .18 acres of land.

Yes, that’s a decimal point. That’s almost two-tenths of an acre. With a five bedroom house on it.

I’m not complaining. In my ideal world, I’d have more land, but in the real world, I never thought I’d own anything. I owe it all to the fact that my life partner is relentlessly driven and hopelessly dedicated to providing for his family.

Having lived here only seven months, the land is still relatively blank, like a canvas waiting for a work of art to bloom upon it. 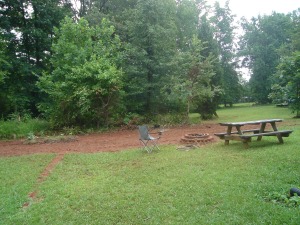 Although our imaginations are constrained by space restrictions, in a sense, it allows us to be even more creative. We have to get wacky and funky (which we both love to do) with our designs, and we are forced to narrow down what actually matters to us and what we can live without.

For me, I very much want: vegetable garden, strawberry patch, fire pit/hang out area, herb garden

For my husband: fruit trees, workshop

This morning we drew a sketch of the property and played with possibilities. I am acutely aware of what a special time this is, to lay the foundation of the life we will live.

It will, Great Spirit willing, be a life of food, family gatherings and creativity. 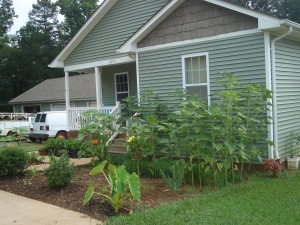 One thing I’ll be sharing with the tribe here is my family’s journey from renters to homeowners, a transition which should take place in the next couple of months.  Our story is a little bit unique because we are partnering through Habitat for Humanity, which has always been a program that I’ve heard about but never knew the nitty-gritty of, nor have I ever known anyone who’s actually gone through it.  Now you can say that you do!

To fill you in a bit on our back story, here’s an introductory essay I wrote when we were first accepted into the Habitat Homebuyer program back in September of last year:

The Dream of a Home 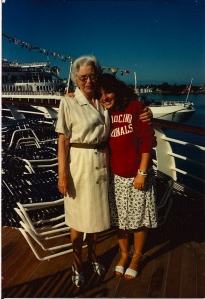 In the last two years of her life my Grandma suffered a lung embolism and a broken hip, wrist and foot.  My parents repeated, as they had for years, their offer for her to move into their spacious home, which they’d bought in that size specifically for such an eventuality.  My Grandma politely but adamantly refused.  They then offered to help her move into a retirement community of her choice.  She again declined.  As absurd as it seemed for a frail, ailing 90 year-old to intend on living alone, and as worried as I was for her, I did understand; she lived in the house she and my Grandpa had bought over 50 years ago, where she’d raised her son, entertained her bridge group, spoiled her grandkids and comforted her dying husband.  In addition, she lived a few blocks from her church, her friends, her hairdresser and all her favorite shops, her “village” as she always referred to it, and she wasn’t leaving it for anything.  And she never did.

My Grandma’s attachment to home and community lives on in my own heart, though it has yet to be fulfilled.  I’ve lived my adult life below the poverty line, moving from town to town in search of a stable situation, unable to sink the roots that ache to make a lasting connection.  It seemed the world had changed since my Grandma’s day and that home ownership was an impossibility in the economy of my day. I never allowed myself to dream that I, too, could have my own home in my own “village” until I met my husband six years ago.

He is unlike anyone else I’ve ever met in that he talks big, and then he lives it.  I’ve heard lots of people dream and then I’ve watched them languish in their ambitionless lives as their dreams withered.  When I met Richard he planned to get a Master’s degree in journalism from the University of Oregon, but he hadn’t even been accepted to the program yet.  Within two years he had graduated with achievements under his belt which proved he was not only going to do what he said, he was going to completely rock it.

So when he talked of his own dream of owning a home, I let a little hope in.  Then began the systematic dashing of those hopes against the rocks of numbers on paper — Richard and I owed too much money and he was being paid too little in the career for which he’d earned his Master’s.  Apparently the future of our little family having a home in which to nurture five wonderful children to happy, healthy, productive adulthood was not a risk any financial institution would consider taking.

And then he told me about the possibility of home ownership through Habitat for Humanity.  Not only was there a renewed glimmer of hope that we could work towards owning our own home, but there was also a community already established in which I might earn a place to be useful, where my children, my husband and I would finally belong.  I was suddenly grateful that we’d been denied entrance into an impersonal, money-oriented bank loan arrangement so that we could have the chance to participate in something much more meaningful and people-oriented.  To think that our mortgage payments will help to perpetuate such an amazing program makes home ownership an even greater blessing.

When I told my Mom the news that we’d been accepted into the Habitat program, I mentioned how sad it made me that I couldn’t call Grandma and tell her my good news the way I did with everything else before she passed away this last Christmas.  My mother paused, then said, “You know she knows.”  Even though I can no longer hear the joy in her voice or her words of pride in receiving the news, I do know that my Grandma knows and shares in this happy opportunity for her granddaughter and great-grandchildren to live her same dream of home and community.